Broken Arrow, Oklahoma is one of America’s most livable cities. Our community has
had phenomenal growth at different phases of its first 100 years, from 1902-2002. Now already
seventeen years past that centennial celebration, Broken Arrow continues to thrive at an
exponential rate, which began in the early 1970’s. The primary reason is because of her people.
Other contributing factors to its growth and commerce is the desire to “Keep Broken Arrow
History Alive” with the construction and operation of The Museum Broken Arrow, which was
built right in the heart of the Rose District. It connects people from all generations to enjoy our
downtown area. 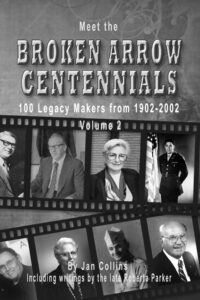 During the 1940’s, Broken Arrow was known as a City of Roses and Sparkling Spring
Water, due to the contribution of the Ladies’ Self-Culture Group and the natural springs in the
southern part of this area.

An annual Pioneer Dinner has allowed those who graduated from Broken Arrow to enjoy
reuniting with their classmates which coincides with Rooster Days. This event began as a
necessity for farmers and has continued to grow into one of the state’s largest and longest-
running annual festivals. We are pleased to welcome everyone, no matter where they attended
school.

During the centennial year, Broken Arrow selected 100 of its most influential citizens
who founded, established and developed Broken Arrow into what it is today. The reader will find
their biographies and stories inspiring, somewhat poignant and motivating. We appreciate and
respect the leadership of those who pioneered the way for us today. They are true Legacy Makers
because many of their descendants still live in this area. Not only the roosters are crowing about
our community. WE ARE BROKEN ARROW PROUD!